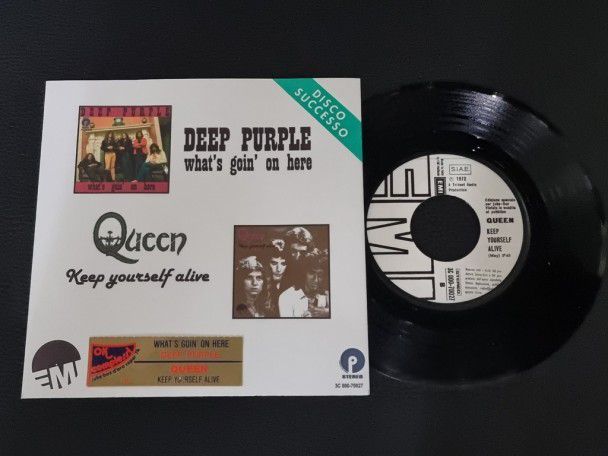 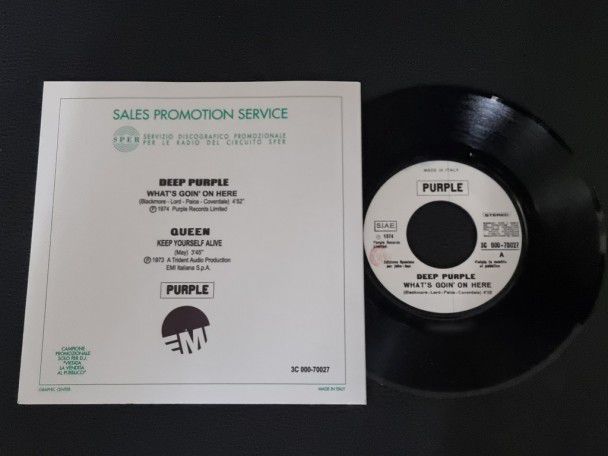 Deep Purple (what's goin on here) on the b Side

What is a cover for jukebox S.P.E.R.?

The S.P.E.R. (Acronym for Society For Radiophonic Editions) designed covers for Juke Box abandoned records from public facilities, in the years around 1993-2002.

The life of a Jukebox Italian record should have been very short: from the issue, distribution, withdrawal and the consequent destruction, could spend 12 months maximum. It was a promotional record destined to that circuit.

Plant operators who used them, should return them after use of one season (2-3 months), and the records would have to go through the shredder, destroyed.

In fact, very often these refunds were not made or controlled, and the managers simply kept vinyl records, replacing them with newly arrived news.

In the early 90s, with increasing vinyl collecting phenomenon in Italy, most of these records only conceived for a PROMOTIONAL use, returned to the level-based market (stalls, markets, record fairs, etc.), often without an identifying cover (and protective), and through international fairs they crossed also the frontiers of Italy

The SALES PROMOTION SERVICE, which until then distributed the records capillary, then entrusted SPER, as an intermediary, the task of printing a limited number of identifying sleeves, of course, "posthumous" for each support before 1996, at the lowest possible cost, to sell them to those who request them (sellers registered or occasional) in order to regularize this way the products, that emerged in a still-free stock market.

The first "runs" were made exclusively for pop & rock artists of great influence, and a large number had been selected by the sellers carefully. Later they passed to minor names.

The materials firstly made were very rough and often "proofs" were sent to the sale, though not completed, and with macroscopic printing errors. Xerox copy in two / three colours.

Subsequently they were printed exclusively on paper in "basic GREEN", where the names of the artists, titles, and other details in turn changed.

Print runs for the first few years can be considerable in 150/200 copies, later also came to 400. The distribution and sale was done very often at national and international record fairs (Italy, Netherlands, Great Britain, Spain).

The SPER/sleeve-Project closed in 2002/2003, the last jukebox records were made in those years.

The entire archive of unsold productions, samples, and more. were sold at a public auction in 2003.

After the advent of Internet and of the Ebay, these sleeves became more and more famous, with various fan dedicated-site.

To recognize a SPER sleeve from 1997/98 onwards, is quite simple, because of the paper in "basic GREEN" above mentioned.

We distinguish clearly two different prints in the same sleeve: one TYPO-printing and a xerographic or digital.

For the pressings between 1993 and 1997 must rely on those with experience, that had already handled at that time.

An archive is in future planning, by various Italian collectors and enthusiasts.

Save products on your wishlist to buy them later or share with your friends.